Illiteracy used to mean not being able to read and write. No longer. As Alvin Toffler says above, it means much more. Its definition has broadened while also becoming much less specific.

Over 30 years ago, my father-in-law decided to retire. He had worked for more than 30 years as a draftsman and loved his work. He enjoyed the precision and creativity that his job allowed. Throughout his time as a draftsman, he moved from pencil and paper to learning to do his drawings using a computer program. As T-squares, pencils and papers were moved further and further away from his work life, his desire to retire became stronger and stronger. He finally made the decision to retire and never looked back. When asked how he knew it was time to retire, he said quite clearly, “I didn’t want to learn another way to do my job. I loved my work, but I didn’t want to learn anything new.” In other words, he didn’t want to unlearn and relearn. For him the timing lined up. He was old enough to retire and had a good life ahead of him with lots to look forward to. For others, things don’t line up quite as nicely.

In education – as in most other fields – learning, unlearning and relearning are constant states of being. Many times the barrier is one of mindset rather than difficulty with the skill or concept. It’s one thing to decide at retirement age that you’ve learned enough and it’s time to move on; that’s not so easy for most of your work and school life. How literate are you? What have you unlearned and learning recently?

Recently, I was having dinner with a friend and her children, and the topic of bedtimes came up.  I explained that my daughter and I would argue about bedtime when she was their age. She insisted that everyone in her school stayed up until after 10 p.m., and I unreasonably insisted she be in bed by 8:30. As many parents have experienced, she wore me down, so I said that I would no longer be in charge of her bedtime. She could stay up as late as she wanted as long as she could get herself up and ready for school and have the energy and positive attitude needed to not only make it through her school day but would also return home and be a pleasant member of our family. She stayed up until 11 p.m. the first night… and that was the end of the experiment. She discovered what I knew from years of watching her; she needed more sleep than many of her peers. She wasn’t rested unless she slept at least 9 or 10 hours each night. We no longer fought about bedtimes; she was in charge. I let her decide and honored her choice. We agreed on the limitations of the choices and I stepped out. As you can imagine, the boys with whom I shared this story were delighted to hear this (the parents not as much) and asked their parents to institute “Lisa bedtime” at their house.   END_OF_DOCUMENT_TOKEN_TO_BE_REPLACED

Last week, I sat and watched the bombogenesis blow huge snowflakes across the playground at our school. Bombogenesis… really? What a surprise to learn the word is real. A Google search reveals a definition and everything that comes with any other real word; yet, it is not listed on dictionary.com. So, is it a word? NOAA says it is. Whether it is “officially” a word or not, it sure is fun to say, even if we don’t exactly know its meaning (unless we happen to be meteorologists, of course).

I love wordplay. I make words up constantly, complete with definitions. Several years ago, in an effort to share my enthusiasm for words (or “wordthusiasm”) with students, we studied the origin of words and made our own dictionary, creating new words whose meanings were based on their origin. It was great fun and supported students’ continued vocabulary development. END_OF_DOCUMENT_TOKEN_TO_BE_REPLACED 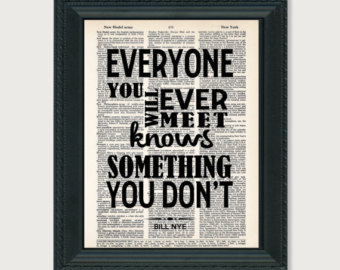 That just about says it all. We can never know everything about everything. It is simply not possible. Schools teach a body of knowledge striving to ensure that children evolve into literate and educated adults. No matter what is included in that body of knowledge, no matter what electives students choose as they move through school, and no matter how long they are in school, they will leave not knowing things. That is the paradox of education. We are in school to learn; we leave with more knowledge than we started with and even more things we don’t know.

Education’s purpose is not to fill young minds with information. It’s true purpose is to promote thinking, questioning and understanding. Children aren’t containers to be filled. Bill Nye the Science Guy says it all in the above quote. Everyone has something to teach us. We may not know what it is or what to expect, but we do know that we will learn something from each and every person we encounter if we are open to the learning. And if that is what we learn in school we will be held in good stead during our school years and beyond. What have you learned from someone today?